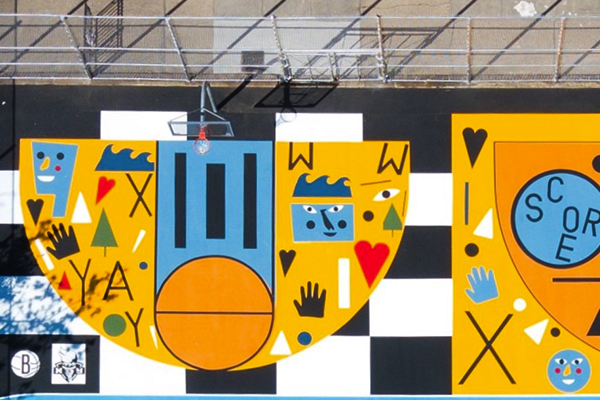 The newly renovated space features green infrastructure to help reduce flooding and any sewer overflows into nearby East River, an outdoor classroom area, and basketball courts

BROOKLYN (June 13, 2022) – Trust for Public Land, with support from the Brooklyn Nets & New York Liberty Foundation, Kevin Durant Charity Foundation, and the NYC Department of Environmental Protection, celebrated the opening of the newly renovated schoolyard at the Juan Morel Campos Secondary School in Brooklyn. The schoolyard is part of Trust for Public Land’s New York City Playgrounds Program, which aims to transform asphalt playgrounds into vibrant city parks open to the community.

“Parks and playgrounds provide tremendous benefits for communities, from mental and physical well-being to improving environmental health, and having open space close to home means people will use it more often and get more benefits,” said Carter Strickland, VP of the Mid-Atlantic and New York State Director for Trust for Public Land. “We’re thrilled to be able to celebrate the opening of this new outdoor space that will serve so many Brooklyn residents and give children a safe place to play and learn.”

Sustainable elements were incorporated throughout the schoolyard, including permeable pavers and a turf field that will help capture 840,000 gallons of stormwater each year. These designs will help prevent flooded streets and overwhelmed sewer systems, keeping untreated water from polluting New York City waterways.

“In addition to being a beautiful play space for students and the neighborhood, this new Green Infrastructure playground will absorb all of the rain and snow that falls on it, which will help to reduce any neighborhood flooding and improve the health of nearby Newtown Creek,” said DEP Commissioner Rohit T. Aggarwala. “Thank you to the entire I.S. 71 community, our partners at Trust for Public Land, and the Brooklyn Nets and New York Liberty – what a team!”

The schoolyard will be open to the community during non-school hours and will serve over 17,000 residents (4,600 children) living within a 10-minute walking distance.

This playground is made possible through a partnership with the NYC Department of Environmental Protection, NYC Department of Education and NYC School Construction Authority, with funding support from the Brooklyn Nets & New York Liberty Foundation, and Kevin Durant Charity Foundation. The playground officially opened on Friday, June 10 following a ribbon cutting ceremony with representatives from Trust for Public Land, Juan Morel Campos School of the Arts, the Brooklyn Nets, New York Liberty, NYC DEP, and local elected officials as well as Liberty mascot Ellie the Elephant, and students from the school were also in attendance.

“The Brooklyn Nets & New York Liberty Foundation strives to create equitable access to education and sports,” said Mandy Gutmann, Executive Vice President, Community Relations and Communications, BSE Global. “We know that the skills learned in basketball can transcend into tools for life and through this partnership, we are helping ensure the surrounding community has a place to play. We hope these beautifully designed courts will inspire the students to play hard, study hard, and have fun.”

“New York City is at its best when kids and families have the spaces they need to be great,” said Jose Mena, Director for KDCF. “Since 2015, we’ve helped transform 27 basketball courts across the world, and it is special to have worked so closely with the Nets, Liberty, Trust for Public Land, and surrounding community on this project in Brooklyn.”

For nearly 25 years, Trust for Public Land has guided thousands of students and parents in school districts from coast to coast to make the most of their schoolyards. The Trust for Public Land has transformed more than 250 underused schoolyards nationwide into nature-rich parks designed to address inequities in education, health, and climate impacts. Every one of our green schoolyard transformations includes agreements between a school district and other local agencies to allow the community to use the space when school is closed.

According to research from Trust for Public Land, open access to all public schoolyards during non-school hours would put a park within a 10-minute walk of more than 19.6 million people, including 5.2 million children, who currently lack access.