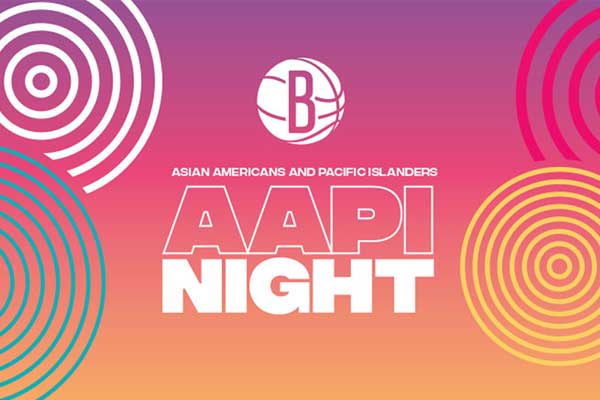 BROOKLYN (March 28, 2022) – The Brooklyn Nets will celebrate Asian American and Pacific Islanders (AAPI) during the team’s home game at Barclays Center on Tuesday, March 29 against the Detroit Pistons at 7:30 p.m. Brooklyn is home to more than 300,000 residents of Asian and Pacific Islander descent and the Nets will honor the many cultures and ethnicities that make up the AAPI community.

Ahead of the game, on Monday, March 28, the Nets will host an AAPI Night Market powered by Panda Express, the largest American Chinese restaurant concept in the world, on the SeatGeek Plaza at Barclays Center from 6-8 p.m. As a family-owned restaurant concept founded by Chinese immigrants, Panda Express is proud to celebrate AAPI cultural heritage and, most importantly, support the local community. The market will feature food samplings from local Asian restaurants and a special performance by Chinese American hip-hop artist Bohan Phoenix. Guests will also have the opportunity to learn about ways to support the Asian community from non-profit organizations Welcome to Chinatown and Heart of Dinner. The event is free and open to the community and the first 75 people to arrive will receive a special Nets giveaway.

“The Brooklyn Nets are honored to celebrate the rich cultures and traditions of the AAPI community with two nights of special programming,” said Jackie Wilson, Chief Diversity, Equity and Inclusion Officer at BSE Global, parent company of the Nets and Barclays Center. “We know how powerful food can be in creating connections and are excited to host the Night Market featuring cuisine from local Asian restaurants as an extension of our Supplier Diversity Program.”

The celebration continues at Barclays Center the following evening at the Nets game. To honor the Nets’ inaugural AAPI Heritage Night, comic series House of Slay collaborated with the team on an exclusive merchandise collection. House of Slay is a collective of five prominent members of the New York fashion world – Phillip Lim, Prabal Gurung, Laura Kim, Tina Leung, and Ezra William – who came together during the pandemic when there was a rise in Asian hate crimes and created an influential digital comic series. House of Slay is a place for everyone, an inclusive space representing not only the AAPI heritage of its founders, but underrepresented voices from all walks of life. The merchandise collection will be available for purchase exclusively at Brooklyn Fanatics, the Nets’ team store at Barclays Center.

Prior to tipoff, female South Asian acapella group New York Masti will perform the national anthem and Bohan Phoenix will return to perform during halftime. The evening’s programming will also include AAPI pioneers honored on the arena’s centerhung and outdoor glass LEDs, a pregame mixer presented by Ciroc in the arena’s 40/40 Club, and special dance routines from Team Hype and the Brooklynettes. There will be a photo backdrop featuring the House of Slay design on the concourse near section 23.

Fans interested in attending the AAPI Heritage Night game can purchase tickets online at brooklynnets.com or seatgeek.com. For more information about the United Games, visit netsunite.com.