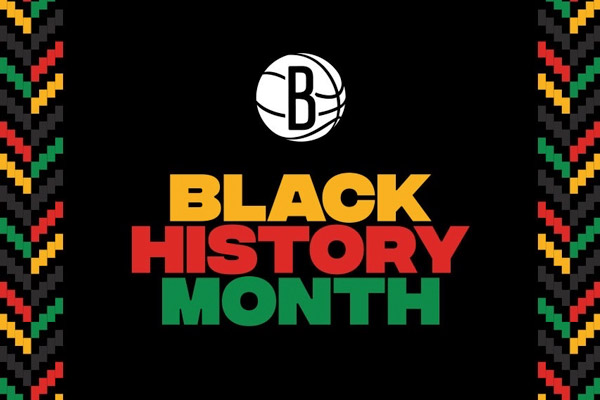 BROOKLYN (Feb. 4, 2022) – The Brooklyn Nets will celebrate Black History Month during each of the team’s five home games at Barclays Center in February by honoring the legacy and impact of Black pioneers across a range of industries. Black pioneers of the past, present, and future will be highlighted to show that Black history is not only something of the past, but that the next generation of Black leaders are creating history in real time. A huge influence in creating that history are Historically Black Colleges and Universities (HBCUs), which are celebrated in the programming.

The celebration tips off Tuesday, Feb. 8, when the Nets take on the Celtics, where Black pioneers of the past will be honored on the arena’s centerhung and outdoor glass LEDs. Prior to tipoff, Stellar Award-nominated Gospel musical group The Group Fire will perform both the national anthem and “Lift, Every Voice & Sing,” and rapper Benny The Butcher will perform during halftime. The first of the Nets’ Black History Month merchandise collaborations will also debut at the Feb. 8 game. The merchandise collection is designed by TIER, a Brooklyn-based creative fashion brand whose vision is guided by the motto “Art Never Dies”, and will be available for purchase exclusively in the Nets’ team store at Barclays Center, Brooklyn Fanatics. Photos of the line can be viewed/downloaded here.

On Monday, Feb. 14, the Nets will honor Black pioneers in healthcare. The national anthem and halftime show will be performed by R&B artist Felicia Temple, a former contestant of NBC’s “The Voice” and healthcare worker. On Thursday, Feb. 17, Black pioneers of the present will be honored, and The Jones Boys will perform the national anthem. Hot 97’s Funkmaster Flex will be the special halftime DJ.

On Thursday, Feb. 24, the Nets will support HBCUs with a series of events for students and alumni. During the day, the Nets will host an HBCU fair and admissions panel at Barclays Center for local students, and there will also be a pregame HBCU alumni networking event presented by Ciroc in the arena’s 40/40 Club. Students interested in attending the HBCU fair can learn more at HBCUnight.org. Kimani Jackson, Florida A&M alumna and NY Liberty entertainment team member, will perform the national anthem and halftime will feature a step performance from members of the Divine Nine, a group of historically Black fraternities and sororities. The second of the Nets’ Black History Month merchandise collections – a collaboration with Legacy History Pride – will also debut at this game and be sold exclusively at Brooklyn Fanatics. Legacy History Pride was founded on the vision of fulfilling the dream of a legacy, the history of family spirit and the pride of Black culture. Tahir Murray, the brand’s founder was born in New York, has family ties to Brooklyn and is a graduate of Howard University. Photos of the line can be viewed/downloaded here.

To close out Black History Month, the Nets will honor Black pioneers of the future on Monday, Feb. 28. Grammy-winning Gospel artist Hezekiah Walker will give fans a primetime pregame performance and perform the national anthem. A special social justice inspired performance by the Nets’ entertainment teams will take place at halftime.

Additionally, as part of their Black History Month celebration, the Nets have partnered with RISE, a renowned organization whose mission is to create a nation unified through sports, to host an interactive display during each of the team’s home games in February. Fans can visit the space (located on the main concourse near section 24) to learn about key moments where sports and social justice intersect, as well as important Black figures in Nets’ history.

Designed by the Nets’ in-house creative team, the Black History Month marketing campaign is inspired by the Kente cloth, which has become a symbol of African American identity and the best known of all African textiles. Kente comes from the word kenten, which means “basket” in the Asante language. The design will be featured throughout the month in-arena during Nets games and across all Nets social media and digital channels.

Fans interested in attending any of the Black History Month games can purchase tickets online at brooklynnets.com or seatgeek.com. For more information about the United Games, visit netsunite.com.