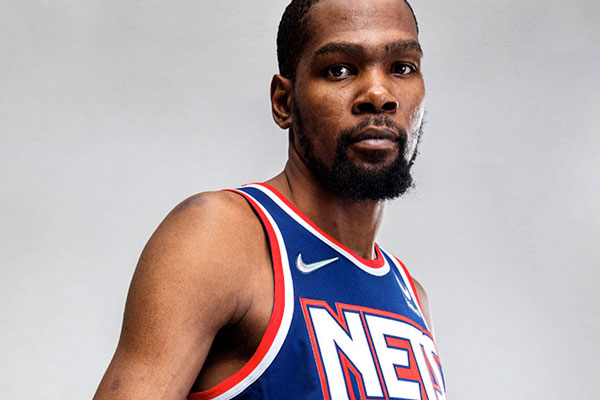 BROOKLYN (Nov. 1, 2021) – The Brooklyn Nets are blending various elements from previous fan-favorite uniform styles to create the Nike NBA 2021-22 City Edition uniforms. The new uniforms for this season were designed to incorporate different eras of the franchise, creating a modern look while paying homage to the totality of Nets history.

In celebration of the league’s 75th Anniversary Season, this year’s Nike NBA City Edition collection showcases how teams are not defined by a single era, but by their most iconic moments. The uniforms juxtapose old and new to create an unforgettable look and feel for this milestone season. Featured in the Nets uniform pictures is Kevin Durant, who was named to the 75th Anniversary Team last month.

From the stars and stripes design of the Dr. J era, to the redesigned 1990s wordmark revived with last season’s Nike NBA Classic Edition jerseys, the argyle side panel of the consecutive NBA Finals teams in 2002 and 2003, and the influence of the distinctly styled herringbone court on the team’s uniforms in 2012, the 2021-22 Nike NBA City Edition Uniform honors the Nets’ legacy from New York to New Jersey and back, highlighting a sequence of recognizable looks.

STARS & STRIPES: From the iconic uniform that debuted in 1972 and defined the team’s look for nearly two decades, the body color of this season’s Nike NBA City Edition uniform is based on the navy-blue road jersey, incorporating the stars from the side panel and placing them over the red striping from the original uniform. The Nets later brought back an updated version of their Stars & Stripes classics for the 1983-84 season and the franchise’s logo from this era — modified to reflect the move to Brooklyn — also appears on the shorts of the 2021-22 Nike NBA City Edition uniform.

TIE-DYE: While the washed-out, light-blue gradient of the 1990-91 road set lasted only one season, the new chest panel wordmark that debuted that same year continued through 1997 and is carried over in this year’s look and from last season’s Nike NBA Classic Edition jersey.

BACK-TO-BACK FINALS: From the look that defined two NBA Finals teams and four division championships, the argyle side panel has been incorporated and the logo that ran through that era is placed on the shorts.

HELLO BROOKLYN: The red side panel is threaded in a herringbone pattern inspired by the hardwood court the Nets currently play on at Barclays Center. This pattern first appeared in the piping of the black and white jerseys the Nets debuted with their move to Brooklyn in 2012.

“Like many of today’s Brooklynites, the Nets grew up in the suburbs and eventually transitioned to the big city in search of a bright future,” said John Abbamondi, CEO of BSE Global, parent company of the Brooklyn Nets and Barclays Center. “The looks of our past will forever shape who we have become and we are proud to honor our history with this season’s City Edition collection.”

The Nets will debut the uniforms on court Wednesday, Nov. 3 in a matchup against the Atlanta Hawks at Barclays Center, and will wear them for a total of 23 games this season. A full schedule of games in which the Nets will wear the Nike NBA City Edition uniform is below.

Michelob ULTRA is the presenting sponsor of the Nets’ Nike NBA City Edition platform and will unveil a custom logo lock-up to commemorate the first time the Nets’ will wear the uniforms on-court Nov. 3. This logo lock-up will be integrated into exclusive digital and social content during games the team wears its Nike NBA City Edition uniforms, and Michelob ULTRA will be elevated through other various ancillary programs throughout the 2021-22 NBA season with exclusive ULTRA-themed merchandise and giveaways.