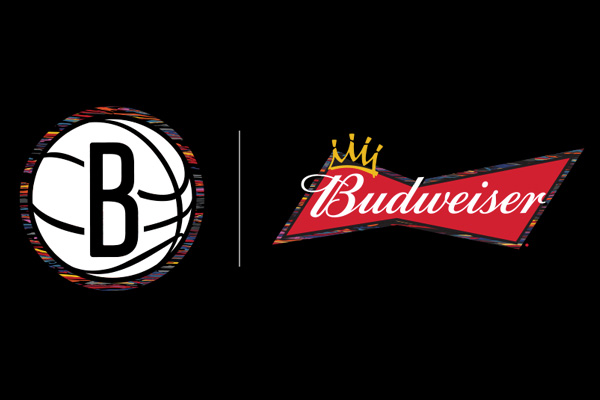 BROOKLYN – In an historic move, Budweiser has shifted the crown in its iconic bowtie logo to hover over the ‘B’ to mark a new partnership with the Brooklyn Nets. The specially created logo will be used in branding for the Nets City Edition platform, which launched last night with the unveiling of a new team uniform that honors The Notorious B.I.G., one of Brooklyn’s favorite native sons. The King of Beers’ shifted its crown as a nod to Biggie Smalls’ famous “King of New York” photo.

As the presenting sponsor of the Nets City Edition Platform, Anheuser-Busch will align with the Nets on exclusive digital and social content and will have extensive brand integration during games that the team wears its City Edition uniforms. The partnership will also provide local community support, including a give-back activation as well as a social media contest where fans will showcase their Brooklyn pride for a chance to win a VIP experience at a Nets home game.

Expanding beyond the City Edition platform, Anheuser-Busch has also become the Official Domestic Beer Sponsor of the Brooklyn Nets. The multi-year agreement includes additional Nets community initiatives with a focus on the military and sustainability efforts. Anheuser-Busch will also have unique branded spaces within Barclays Center spanning from a Grab & Go food and beverage concession option to a newly designed Suite Level lounge.

“This was an exciting time to pay homage to the legendary borough of Brooklyn and mark this moment in time by creating a new special logo for the Brooklyn Nets City Edition Platform,” said Nick Kelly, vice president of partnerships, beer culture, and community at Anheuser-Busch. “Brooklyn is a vibrant community that brings so much energy to Barclays Center to support their team, and we’re excited to be a part of it.”

Further expanding its already extensive involvement in esports, Anheuser-Busch will serve as the Official Domestic Beer sponsor of NetsGC, the NBA 2K League affiliate of the Brooklyn Nets. This designation will include sponsorship of various NetsGC digital and social content and virtual courtside signage during all NetsGC home games.

“When the King of Beers shifts its crown to partner with the Nets of Kings County, we know a meaningful alliance has been formed,” said Bryan Calka, Senior Vice President of Global Partnerships & Strategy at BSE Global. “The multi-faceted opportunities that Anheuser-Busch is working with us to create provide a natural extension of our brand voice while making a positive impact on the Brooklyn community.”

The special logo will be featured on signage in the Nets arena during City Edition games this season. Budweiser is the official beer sponsor of the NBA and recently renewed its partnership with a new campaign – part of Anheuser-Busch InBev-owned Budweiser’s broader responsible drinking campaign called “Drink Wiser.” Produced with the National Basketball Players Association, versions of the spot will broadcast on television during NBA games, online and in NBA arenas.