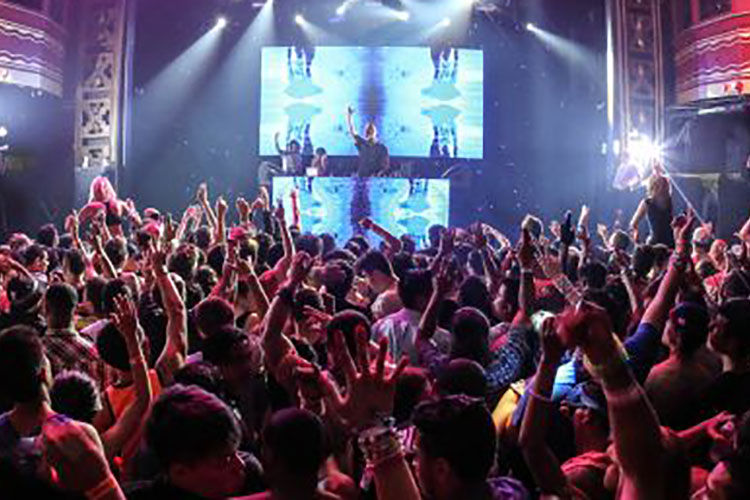 Webster Hall, the legendary music and entertainment venue located in Manhattan’s East Village, is preparing to re-open its doors this spring following a comprehensive renovation to modernize the iconic concert venue. BSE Global and The Bowery Presents, AEG Presents’ regional partner, acquired the operating rights and assets to Webster Hall in February 2017.

Patti Smith and Her Band, Broken Social Scene, MGMT, Empire of the Sun, Old Dominion, Sharon Van Etten, Built to Spill, Real Estate, Chromeo with a Live Band, Big Thief, TroyBoi and more, are among the first musical acts confirmed to perform at the re-opened Webster Hall. These acts, plus other confirmed shows, are listed below with dates and ticket on-sale information. Additional acts, including the venue’s official opening date and performer, will be announced at a later date. Girls & Boys club nights are scheduled to return in September.

The renovations at Webster Hall aimed to preserve the iconic features of the venue, while modernizing it to meet today’s entertainment standards and enhance the guest experience. The Lounge (formerly The Marlin Room) has been revamped to serve as a bar and meeting spot for ticketholders both before and after shows in the Grand Ballroom. Design details of The Lounge include elegant gold stenciling on the walls that pays homage to the original historic design, and fluted glass along the bar that mimics the venue’s former windows.

In the Grand Ballroom, the original stage remains, while acoustics were enhanced to create an optimal live event experience. Fans and artists returning to Webster Hall will notice other new features such as central air conditioning, expanded restrooms, additional stairwells for smoother entry and exit, and the venue’s first-ever elevator that will serve guests with disabilities and speed up each show’s load-in and load-out process.

Behind the scenes, an artist compound was built with upgraded amenities to provide direct access to the Ballroom stage, creating a more comfortable and inviting environment for performers and their management. The venue’s basement level, formerly known as The Studio at Webster Hall, will also return, with more details to be announced at a later date.

Webster Hall, which has operated as a venue since 1886, has undergone several waves of transformation throughout the past century. In the 1920’s, Webster Hall notoriously held masquerade balls and was nicknamed the “Devil’s Playhouse.” RCA Records purchased Webster Hall in 1954 and renovated the venue to include a state-of-the-art acoustically treated ballroom. Notable artists who recorded in Webster Hall’s studio during this time included Frank Sinatra, Bob Dylan (his recording debut), Harry Belafonte, Perry Como, Tony Bennett, and Julie Andrews.

Beginning in the 1980’s, Webster Hall reemerged as “The Ritz,” hosting artists such as Eric Clapton with Keith Richards, U2 (for the band’s first-ever US show), Tina Turner, The Beastie Boys, The Pretenders, Prince, Sting, Metallica, Aerosmith, KISS, B.B. King and Guns N’ Roses. In 2004, The Bowery Presents began booking Webster Hall with artists including LCD Soundsystem, The National, Modest Mouse, John Mayer and Keith Urban, presenting more than 1,000 shows over 10 years. In partnership with BSE Global, The Bowery Presents returns to Webster Hall as owners and operators.

The architect of the revived venue is OTJ Architects, the contractor is Shawmut Design and Construction, and acoustic design is by L’Acoustics. Once open, Webster Hall will employ an estimated 70 people across various positions in the venue, between front of house and back of house, on any given event night.

“It has been an honor to undertake this project with AEG and The Bowery Presents, understanding how much Webster Hall means to the history of New York City and the music community,” said Brett Yormark, CEO of BSE Global. “Maintaining the integrity of this iconic venue has been of utmost priority throughout the entire renovation process, while ensuring that the enhancements modernize the venue for both the fans and the performers. It has been our intention to create a venue pipeline to our larger arenas and we are looking forward to the opportunities that Webster Hall will provide us.”

“Our collective goal was to ensure the history and legacy of this iconic theater while preserving its charm and character and creating an unequaled New York City concert experience for fans and performers,” said Jay Marciano, CEO of AEG Presents.

“After a decade-long relationship with the venue, The Bowery Presents is truly excited to return to Webster Hall now in both an operational and booking capacity alongside our new partners at BSE Global,” said John Moore and Jim Glancy, partners at The Bowery Presents. “As we honor the rich history this venue holds with fans and artists alike, we are excited to begin this new chapter with artists that we love and respect.”

American Express® Card Members can purchase tickets before the general public beginning Monday, February 25 at 10AM ET through Thursday, February 28 at 10PM ET before the general public on sale on Friday, March 1 at 12PM ET (unless otherwise noted in the show listing. Terms and limitations apply). Tickets for all shows are available at Ticketmaster.com, 800-745-3000, and in-person beginning March 1 at the Rough Trade NYC box office (64 North 9th St in Brooklyn, cash only) on Fridays and Saturdays between 12 p.m. and 6 p.m. Details for all shows can be found at WebsterHall.com and BoweryPresents.com.