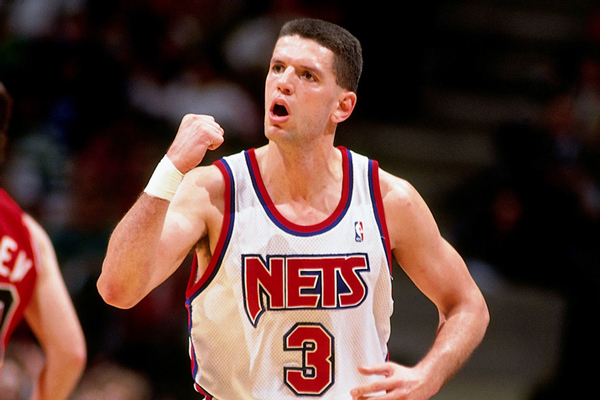 BROOKLYN – The Brooklyn Nets will celebrate the legacy of former New Jersey Nets standout Drazen Petrovic on Monday, February 26 when the Nets host the Chicago Bulls at Barclays Center. This year marks 25 years since the star’s tragic death.

The Feb. 26 game will honor Petrovic’s contributions to the Nets franchise from 1991-1993. During that time, Petrovic led the Nets in free throws and field goals, ranking among the top of all guards leaguewide. In his first season with the team (1991-92), the Nets made the playoffs with 14 more wins recorded than the previous year. In his second and final season, Petrovic ranked 11th leaguewide in PPG with 22.3 and made All-NBA Third Team. The Croatian native is remembered as one of the greatest European players of all time.

As part of the special evening, the first 10,000 fans who arrive at Barclays Center will receive a Drazen Petrovic Starting Lineup figurine sporting the New Jersey Nets red, white, and blue uniform in No. 3, which the team retired shortly after he died.

During the game, the Nets will recognize Biserka Petrovic, Drazen’s mom, who will be in attendance from Croatia. The center hung scoreboard will show video highlights of Petrovic’s career, and the arena’s LEDs will light up blue and red as tribute.

Commemorative items will be available for purchase at the Swag Shop at Barclays Center, including two Drazen Petrovic T-shirts – one red and one white – and two styles of blue New Jersey Nets hats with Petrovic’s No. 3.

As an additional throwback to the 90s, fans in the Swag Shop can play as Petrovic, alongside his teammate Derrick Coleman, in the original NBA Jam, the iconic basketball arcade game that launched in 1993.

Tickets to the Nets game are available for purchase at barclayscenter.com, Ticketmaster.com, or the American Express Box Office at Barclays Center.