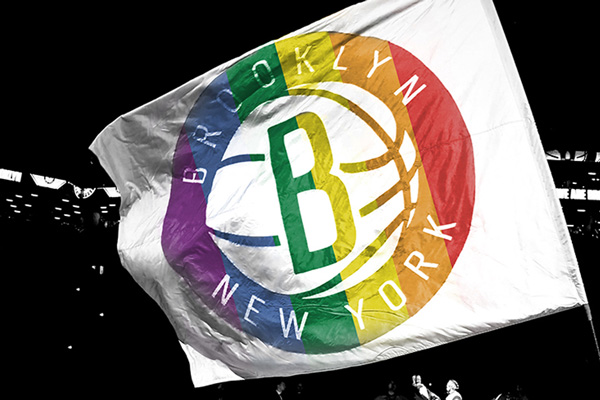 BROOKLYN – The Brooklyn Nets will celebrate diversity and inclusion as the team hosts its second-annual Pride Night on Wednesday, January 17 when the San Antonio Spurs visit Barclays Center. The Pride Night celebration will feature prominent members and allies of the LGBTQ community participating in a pre-game awareness panel and special in-game entertainment.

The panel will be part of an ongoing speaker series which will focus on celebrating differences and inspiring change through the power of sport.

Pride Night will be embraced throughout the venue including special in-game entertainment and video content, as well as food and beverage offerings.

A t-shirt with the Nets logo in rainbow colors will be featured as the Item of the Game, and will be available for purchase at the Swag Shop at Barclays Center for $15, alongside an array of other special Pride merchandise.

One special member of the community will be honored during the game with the Jason Collins Award for Courage and Leadership. The annual award, which was first presented to Jason Collins at the Nets’ inaugural pride night, celebrates a courageous leader.

Fans interested in attending this special night can visit brooklynnets.com/pride or ticketmaster.com. During the ticket purchase process, fans can select the $20 panel option in addition the ticket price. All proceeds from the panel tickets will go to the Brooklyn Nets Foundation, which will designate the funds to support LGBTQ charities. For more information on group sales call 718-942-9690.

Fans are encouraged to show support on social media throughout the night by using #NetsPrideNight.