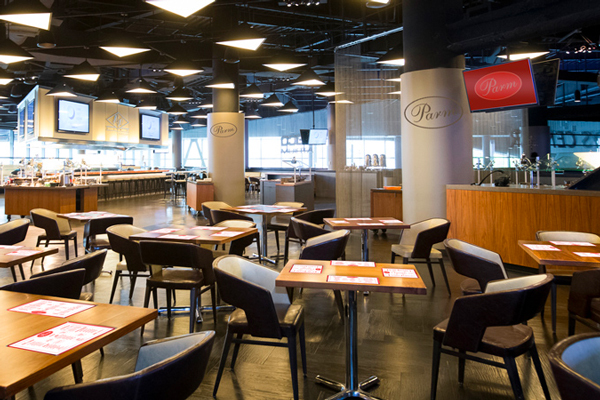 BROOKLYN – The team behind Major Food Group (Carbone, Sadelle’s, Dirty French, the recently opened THE GRILL and THE POOL) is joining forces with Barclays Center to bring another outpost of the beloved casual-Italian hotspot, Parm, to the venue. It will be the arena’s only full-service, sit-down restaurant that is open to all ticket holders. Barclays Center is the first arena to feature a full-service restaurant created by James Beard Award nominees and Michelin starred chefs.

Parm, an acclaimed casual Italian restaurant named one of the 101 Best Places to Eat in North America by Newsweek, will be serving a full menu at Barclays Center, ranging from small plates such as Mozzarella Sticks and Meatballs, to platters and pastas like its famous Chicken Parm and Rigatoni Fra Diavola.

Parm will be situated on Suite Level A, one level up from the venue’s main entrance and adjacent to Barclays Center’s well-known 40/40 CLUB Presented by Tanduay Rum. Reservations can be made by visiting barclayscenter.com. The restaurant will also include a Parm To-Go, through which fans can bring food back to their seats.

To tip-off the new partnership, Barclays Center and Parm will host three opening events on the following dates:

“The addition of New York institution Parm will expand on Barclays Center’s premier food and beverage offerings,” said Brett Yormark, CEO of Brooklyn Sports & Entertainment. “We are proud to deliver fans a unique culinary experience, and provide a premium atmosphere for a delicious sit-down meal at a concert or sporting event.”

“Parm is about celebrating time-honored traditions of New York Italian cuisine and we are proud to share these classics with fans at the iconic Barclays Center,” said Jeff Zalaznick, Co-Founder of Major Food Group. “With locations all around New York City in Nolita, Upper West Side and Battery Park, Parm is at a very exciting stage of growth and we are thrilled to continue our expansion with this venue in Brooklyn.”