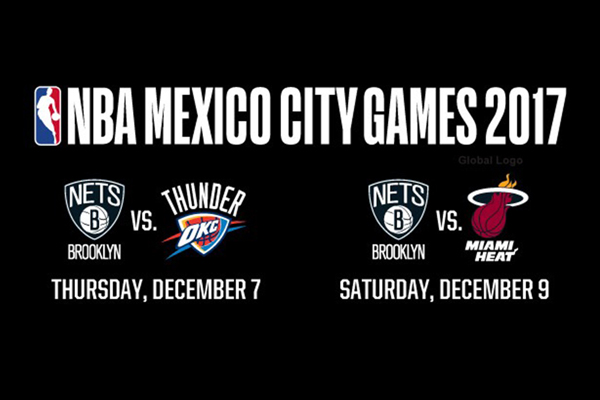 BROOKLYN  – The Brooklyn Nets will say ¡hola! to Mexico City when the team travels to play regular-season games against the Oklahoma City Thunder and the Miami Heat at the Arena Ciudad de Mexico on Thursday, Dec. 7 and Saturday, Dec. 9, respectively, as part of the NBA Mexico City Games 2017.

The games will mark the first time the NBA has hosted four regular-season contests in Mexico in the same calendar year, and the Nets’ second trip to Mexico City, having played a preseason game there in 1999. NBA Mexico City Games 2017 culminates the 25th anniversary celebration of the first NBA game in Mexico and marks the 25th and 26th games in Mexico since 1992, the most NBA games held in any country outside the United States and Canada.

“The Brooklyn Nets are honored to be the host team for the 2017 NBA Mexico City Games and help the league celebrate the 25th anniversary of the first NBA game in Mexico,” said Sean Marks, Brooklyn Nets General Manager. “We are excited to take part in fostering the NBA’s global outreach and to connect with the Nets current and growing fanbase in Mexico. Our players and staff are looking forward to exploring Mexico City and its culture, while providing fans with the experience of two regular season Brooklyn Nets games.”

“I am pleased to be extending the Nets’ global presence to Mexico in December,” said Brett Yormark, CEO of Brooklyn Sports & Entertainment. “These games afford us the opportunity to further expand our international footprint and reach thousands of new fans in a market where the sport is experiencing extraordinary growth.”

The games will be will be available to fans around the world on television and digital media. Fans now have the chance to pre-register to be the first to know about ticket sales and receive exclusive pre-sales prices via http://www.nbamex.com/MXGames2017.