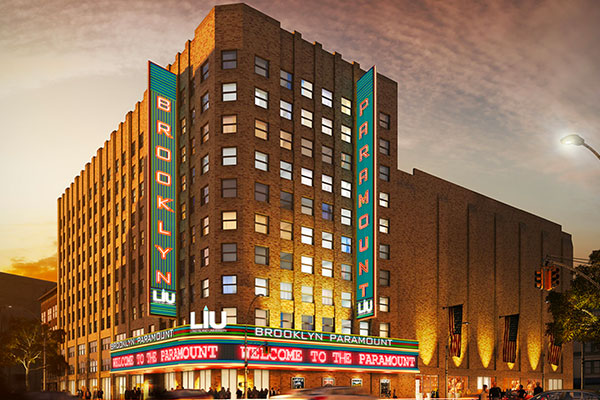 BROOKLYN – The renovation and revival of the LIU Brooklyn Paramount Theatre, located at the Northeast corner of Flatbush and DeKalb Aves. in downtown Brooklyn, is set to begin this fall, with an anticipated opening before 2019. The construction process will restore the iconic theatre to its former glory, provide additional opportunities for LIU Brooklyn students, and will modernize the venue to meet today’s entertainment standards.

The LIU Brooklyn Paramount Theatre project is being carried out by owner/operator Brooklyn Sports & Entertainment (BSE), the same team behind Barclays Center and NYCB LIVE, home of the Nassau Veterans Memorial Coliseum. H3, which is known for its work on Brooklyn Academy of Music, Lincoln Center Theatre, and the New York Botanical Garden, is the architect of record.

BSE will focus on programming the LIU Brooklyn Paramount Theatre with performances by world-class talent, with the goal of growing the company’s venue pipeline and developing affinity with artists early in their careers. Events at the theatre will feature music, comedy, boxing, and more.

The venue will have a capacity of up to 3,000. The flexible seating configuration will accommodate primarily general admission-style setups, with the opportunity to also do seated floor events. The venue will open loge level seating, and will feature premium VIP areas.

“We are eagerly anticipating the construction beginning on the LIU Brooklyn Paramount Theatre,” said Brett Yormark, CEO of Brooklyn Sports & Entertainment. “This team has a track record of delivering spectacular venues, as evidenced by Barclays Center and the newly reopened NYCB LIVE, home of the Nassau Veterans Memorial Coliseum, and the Paramount Theatre will be no different. It will soon thrive again and will bring more top-notch programming to the borough.”

Employment opportunities and internships at LIU Brooklyn Paramount Theatre will be available to students at the university. LIU’s academic mission will be enhanced by the opportunity to gain hands-on industry experience in areas such as arts management, media arts, performing arts, venue operations, and marketing. LIU Brooklyn Paramount Theatre will play host to academically focused programming and provide free or discounted tickets to students for select events.

“This project will provide LIU Brooklyn with a venue for its new School of the Arts and an additional opportunity for experiential learning,” said Dr. Kimberly R. Cline, LIU President. “LIU Brooklyn is proud to partner with Brooklyn Sports & Entertainment to restore the historic Paramount to its grandeur.”

Brooklyn Paramount operated from 1928-1962 as a live performance venue and was the first theatre in the world designed to show talking movies. The stunning Rococo style ceiling and wall trimmings that still remain served as a grand accompaniment to many celebrated performances by artists such as Frank Sinatra, Ella Fitzgerald, Miles Davis, Bing Crosby, Buddy Holly, and Chuck Berry. After closing its doors, the theatre became part of LIU Brooklyn’s campus and now serves as a multi-purpose space for students, staff and guests.