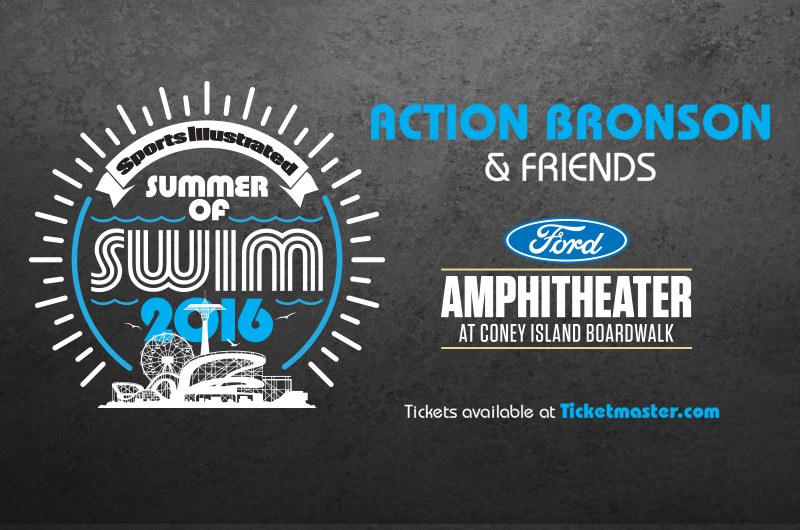 Time Inc.’s (NYSE: TIME) Sports Illustrated, in conjunction with Brooklyn Sports & Entertainment and Live Nation, have announced further details for the first-ever Sports Illustrated Summer of Swim Fan Festival at Coney Island Boardwalk on Sunday, August 28. The free daytime portion of the event is open to the public from noon to 5 p.m. and will feature a series of activities, including model appearances and meet and greets, interactive experiences, pop-up shops and games. Among the SI Swimsuit models scheduled to make appearances throughout the day are current and former cover models, Hailey Clauson, Ashley Graham, Nina Agdal and Hannah Jeter.

It was also announced that Action Bronson is scheduled to headline the ticketed evening concert featuring performances from a soon-to-be-announced opening lineup of friends to begin at 7 p.m. at Ford Amphitheater at Coney Island Boardwalk. For this first-of-its-kind event, Bronson will not only perform his hit music but will curate a collection of food trucks to be stationed inside Ford Amphitheater, where he will make a special appearance prior to the show. Doors open at 6 p.m., following the free all-day 2016 Sports Illustrated Summer of Swim Fan Festival at Coney Island Boardwalk.

Tickets to the evening concert go on sale to the public this Friday, August 5 at 10 a.m. on Ticketmaster.com. Prices will range from $35 to $65, and a limited number of special VIP packages will be available for $100. VIP guests will receive admission to the concert as well as access to an exclusive after party with SI Swimsuit Models and the evening’s musical guests. For details on ticket pricing and packages, visit Ticketmaster.com.

A native of Queens, New York, Action Bronson has become one of hip-hop’s most charismatic and colorful new characters, thanks to his wicked sense of humor, a buffet of impressive releases and a rare knack for updating cherished East Coast aesthetics into indisputably modern music. Bronson developed an enduring fascination with quality eating at a young age, and songs in his discography often read like menu items, connecting his love for food and music. At the SI Summer of Swim evening concert, Bronson will share his passion for food with attendees when he makes an appearance at the food trucks that he helped curate for this event.

Sports Illustrated Swimsuit is a staple of popular culture, reaching more than 70 million fans through its portfolio of digital, social, print and experiential platforms. In the past two years, SI Swimsuit has produced very successful fan festivals in New York, Miami and Nashville, drawing tens of thousands of fans to commemorate the release of the latest multi-platform edition. The 2016 Summer of Swim Fan Festival, a first for the franchise, builds on this as part of a strategy to make SI Swimsuit a year-round enterprise.

The festival is the culmination of a series of summer content releases and announcements from the brand. In the weeks leading up to the event, SI Swimsuit will be releasing exclusive new content from shoots with models Hailey Clauson and Nina Agdal at historic Coney Island and more. Check back on SI Swimsuit’s Swim Daily and follow SI Swimsuit on social media for updates.

Models and music appearances are subject to change.