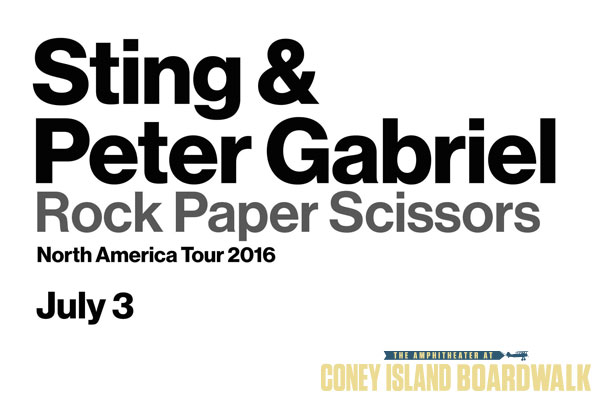 BROOKLYN, NY  – The Amphitheater at Coney Island Boardwalk revealed the first wave of the 2016 inaugural summer lineup including a Grand Opening weekend performance on July 3rd with Sting & Peter Gabriel who have already sold out summer performances along their Rock Paper Scissors tour including Madison Square Garden and Nikon at Jones Beach Theater. Rounding out the venue’s Grand Opening will be the stars of truTV’s hit series Impractical Jokers on July 1st and Rock & Roll Hall of Famers The Beach Boys performing on July 4th.

The Live Nation operated amphitheater will host a wildly diverse summer concert series and will bring some of the biggest names in music to Coney Island, including performances by ultimate rocker’s Jane’s Addiction, founding Eagles member Don Henley, R&B powerhouse Jill Scott, legendary rock band Boston and many more. Additional shows will be announced in the coming weeks. For up to date lineup information please visit www.ConeyIslandLive.com.

“We are so excited to help launch this state of the art venue on Coney Island” said Jason Miller, President, Live Nation New York. “We know you love Nathan’s, The Cyclone and even MCU Park, but when you get inside this incredible venue you are going to wonder where it’s been all your life.”

Tickets go on sale to the public beginning Friday, April 15 at 10am through www.coneyislandlive.com.

The Amphitheater at Coney Island Boardwalk is a 5,000 seat covered open air venue, the first of its kind in the tri state area, and will host a variety of concerts, family, shows, sports, comedy & multicultural events and become the new permanent home of the free Seaside Summer Concert Series. The Amphitheater is being developed by iStar, in partnership with Coney Island USA and serves as a key part New York City’s larger commitment to investing in and revitalizing Coney Island community. Live Nation will operate the venue including booking and promoting a full summer concert season, Legends will provide hospitality services, and Brooklyn Sports & Entertainment is selling the naming rights and sponsorships, and supporting the branding and programming.

Additional shows to be announced in the coming weeks. For up to the date show announcements please follow @ConeyIslandLive or visit www.ConeyIslandLive.com.