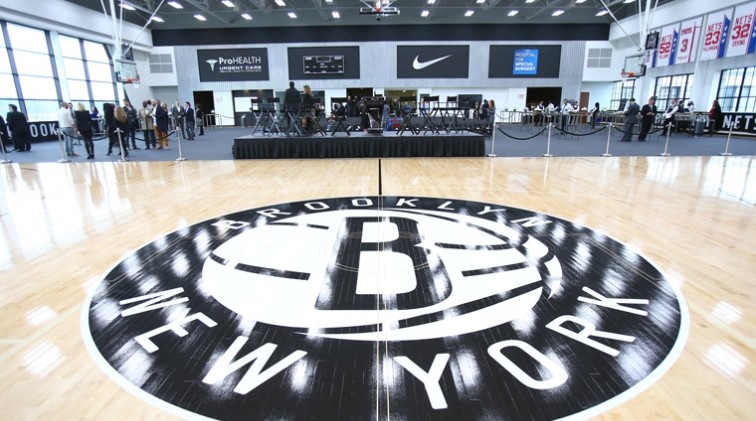 BROOKLYN, NY – The Brooklyn Nets opened the Hospital for Special Surgery (HSS) Training Center today in Brooklyn, the team’s new state-of-the-art full-time practice site with panoramic views of New York skyline. The Nets Basketball Operations Department has relocated from its practice facility in East Rutherford, NJ, and brought more than 40 full-time jobs to Brooklyn, completing the final step in moving the entire organization to the borough.

The privately funded training center occupies 70,000 square feet on the eighth floor and rooftop of a historic waterfront warehouse in Industry City, situated on 39th Street in the Sunset Park neighborhood. Located one subway stop from Barclays Center, the facility boasts world-class amenities, which include two full basketball courts, a weight room, a training pool and two hydro pools, a rooftop entertainment space, an 18-seat multimedia theater, 3,000 square feet of hospitality/players’ lounge space, and a media interview/workroom. The exterior design, consisting of dark metal and a wide expanse of glass, is set against the interior finishes which combine an industrial vibe with softer natural materials to create a harmonious spa-like environment. The result is an overall design which celebrates Brooklyn’s gritty manufacturing history.

“With this new training center in Sunset Park, the Brooklyn Nets are now truly making Brooklyn their home,” said Bill de Blasio, Mayor of New York City. “This facility will bring more than just Nets’ practices to Brooklyn – 40 new full-time jobs, youth basketball clinics, internships for young people and more will ensure this is a great addition for our communities.”

“At last the Nets are completely integrated into Brooklyn,” said Mikhail Prokhorov, owner of the Brooklyn Nets and Barclays Center. “Our arena, our offices and now the HSS Training Center are all part of this great borough, including its vibrant Sunset Park community. Team training and player development are essential parts of our team’s core values and we look forward to building a winning culture on this stunning foundation.”

“HSS Training Center is the result of years of hard work and tremendous cooperation throughout the entire process,” said Irina Pavlova, President, Onexim Sports and Entertainment, the company through which Mikhail Prokhorov owns the Brooklyn Nets and Barclays Center. “It gives us all great satisfaction to see the project come to life and we hope it will be a source of pleasure and positivity for the entire neighborhood.”

“With both feet firmly planted in Brooklyn, the Nets are ready to shoot for the NBA crown in the County of Kings,” said Eric L. Adams, Brooklyn Borough President. “Their state-of-the-art training center in Industry City will create dozens of jobs in our community and build the local economy, with players and team staff just a single subway stop away from Barclays Center. Sunset Park is the site of a bright sunrise for the future of the Brooklyn Nets and our borough’s second-to-none sports scene.”

HSS, the Official Hospital of the Brooklyn Nets, has branding on the interior and exterior of the facility and the Nets practice jerseys feature the HSS logo. HSS is the leading orthopedic hospital in the nation, with a highly respected sports medicine service that is the largest and most active in the country. HSS specializes in working with high performing athletes, and is continuously advancing research and innovation in athletic injury prevention, diagnosis, treatment, and rehabilitation.

HSS has had a close relationship with the Nets for more than 12 years, and has grown with the franchise as it moved from East Rutherford, NJ, to Newark, NJ, and to Brooklyn. Dr. Riley J. Williams, III, sports medicine surgeon at HSS, has served as the Brooklyn Nets’ Medical Director since the 2005-06 season and continues to serve in that function, as well as Head Team Physician for the team.

“It’s exciting to see the HSS Training Center come to life after watching its transformation the past couple years,” said Louis A. Shapiro, president and CEO of HSS. “We are proud of our long-standing relationship with the Nets organization, the players, and fans around the world.”

“The core pillars of our new facility are – Performance, Prevention, and Recovery – a powerful combination that both HSS and our team focus on to achieve success,” said Brett Yormark, CEO of Brooklyn Sports & Entertainment. “HSS Training Center is about serving world-class athletes, while also making a difference in the borough as we utilize the facility to mentor and inspire young Brooklynites.”

In addition to serving as the training ground for the Brooklyn Nets, the facility will host youth basketball clinics, community events, and local business development functions. Additionally, the organization will offer internship and job shadow opportunities to students from Sunset Park, and will promote periodic job fairs at Barclays Center to Sunset Park residents.

Construction on the HSS Training Center created 200 union jobs and began in the summer of 2014. MANICA was the design architect, New York City firm Mancini Duffy was the architect of record, and Gilbane served as the general contractor for the facility. Levy Restaurants, the food and beverage partner at Barclays Center, will provide the in-house culinary service at the HSS Training Center, feeding the team and staff – blending player favorites with nutritional needs.