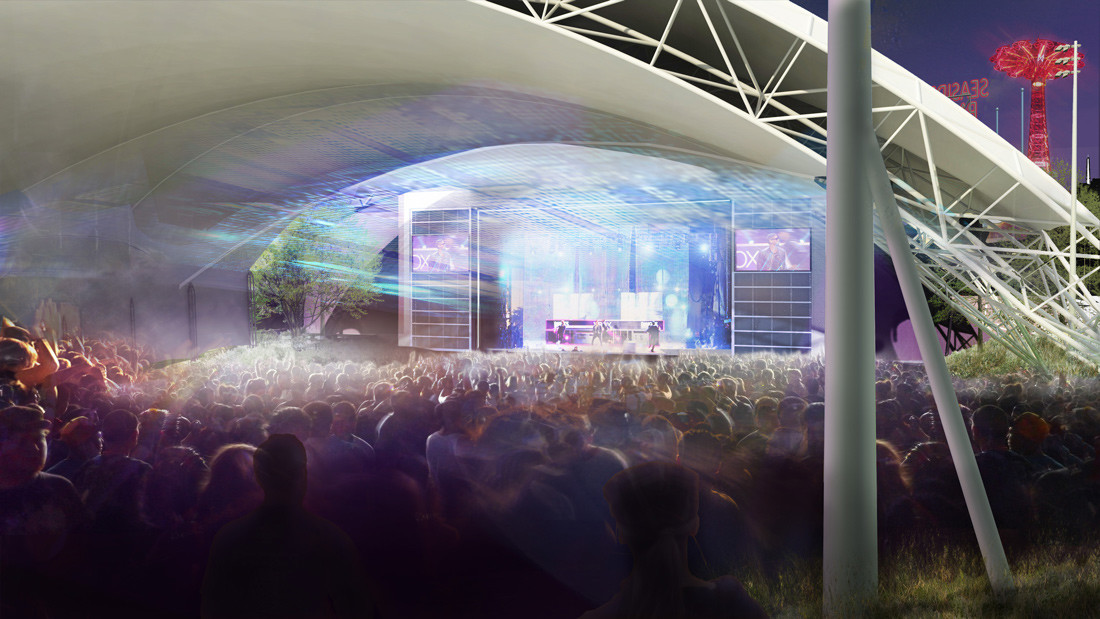 BROOKLYN, NY – The Amphitheater at Coney Island Boardwalk, the cornerstone of the state-of-the-art Seaside Park and Community Arts Center developed by iStar, in partnership with Coney Island USA, will have its grand opening in July 2016 bringing New York City a new outdoor live entertainment venue.  The 5,000-seat covered open-air venue — the first of its kind in the Tri-State area — will host a mix of concerts, family shows, sports, comedy, and multicultural events, and become the new permanent home of the free Seaside Summer Concert Series.

The Amphitheater is located on Coney Island’s famed boardwalk and incorporates the Childs Building, built in 1923 as one of the first large-format stand-alone restaurants in the country. The building is now designated as a New York City Landmark and is currently undergoing a full restoration after suffering decades of neglect. The stage, which will be housed inside of the Childs Building with 50-foot tall doors opening to the Amphitheater during the summer, will also have the ability to serve the interior of the building during the winter months.

Brooklyn Sports & Entertainment (BSE) will sell naming rights and sponsorships, and support the branding and programming of the beachfront complex.  BSE oversees Barclays Center, the Brooklyn Nets, and the business operations of the New York Islanders, and will manage the new Nassau Veterans Memorial Coliseum, which is currently under renovation. Previous projects for BSE include facilitating the naming rights agreements for Barclays Center, IZOD Center in East Rutherford, NJ, High Point Solutions Stadium at Rutgers University, and in the coming months, the new Nassau Veterans Memorial Coliseum.

New York City Economic Development Corporation brokered the deal for the Amphitheater at Coney Island Boardwalk with iStar Financial and nonprofit Coney Island USA in 2014. The City’s $60 million investment in the project has supported the property acquisition, adaptive reuse of the Childs Building, the development of the Amphitheater, and the creation of 40,000 square feet of publicly-accessible landscaped open space. The development will be environmentally sustainable and is designed to become LEED Silver certified. This project is also targeting local hiring through the City’s HireNYC initiative with 180 construction jobs already created and an anticipated 150-200 part-time seasonal jobs and at least 12-15 full-time staff once the Amphitheater opens.

“Our vision for Coney Island is a neighborhood that preserves the past while building for the future, and that balances a vibrant amusement district with a growing residential community,” said NYCEDC President Maria Torres-Springer. “The Amphitheater is ‎a key component of our investment in the neighborhood, and will soon be home to both world class concerts and community events.‎ We’re excited to be welcoming LiveNation, Legends and Brooklyn Sports and Entertainment to the project, and look forward to working with them and iStar to bring this exciting new space to the Coney Island community.”

“America’s Playground is getting ready to welcome its greatest attraction yet!” said Eric Adams, Brooklyn Borough President. “From its very first performance this summer, the Amphitheater at Coney Island Boardwalk will be a must-visit destination for fun-seekers in search of top-flight entertainment from near and far. I am excited that I will get to serve as host of the Seaside Summer Concert Series at this new and exciting venue, which will have a positive impact on the holistic growth of the Coney Island community for years to come.”

“As we await further infrastructure and transportation improvements, this facility will help ignite a cultural flair and vitality the likes of which Coney has been missing for decades,’ said Council Member Mark Treyger. “I have been assured that the team in place is committed to community engagement, and will be working with local shareholders to build on the area’s tradition of free community concerts and other meaningful programming.”

“We hope the Amphitheater is a catalyst for a neighborhood resurgence,” said Julia Butler, Senior Vice President, iStar. “By working with partners such as Coney Island USA, Live Nation, Legends, BSE, and Seaside Summer Concert Series, we are creating a venue that is vibrant and uniquely local.”

“The opening of the new amphitheater further enriches Coney Island’s long history of offering the City of New York, and especially the borough of Brooklyn, unique entertainment in a seaside environment,” said Dick Zigun, CEO of Coney Island USA.  “We are looking forward to making the traditional Coney Island events, such as the Mermaid Parade, even bigger and better with the addition of Brooklyn’s newest destination attraction.”

“Live Nation is thrilled to expand our venue footprint into Coney Island with the opening of this terrific new 5,000-seat venue,” said Alan Ostfield, President of Live Nation North Atlantic. “Live Nation brings the top level talent to its amphitheaters and we are proud to be the ones responsible for bringing these shows to Coney Island, adding to the unique attractions Coney Island already has to offer.”

“It is an honor to be able to provide hospitality services to The Amphitheater at Coney Island Boardwalk,” said Dan Smith, President, Legends Hospitality.  “In addition to being extremely proud to be able to provide hundreds of new jobs to the region, this is an opportunity to continue our great partnership with Live Nation in helping to redefine the hospitality experience across all of their amphitheaters.”

“We are excited to complement our portfolio of properties with The Amphitheater at Coney Island Boardwalk,” said Brett Yormark, Chief Executive Officer, Brooklyn Sports & Entertainment. “Our industry relationships and experience will bring a variety of business and programming to this new destination. We are proud to continue supporting our borough by helping to reinvigorate the historic Coney Island neighborhood.”

“The Seaside Summer Concert Series has presented free concerts for 36 summers. We look forward to continuing the tradition in our permanent home. This is a dream come true!” said Debra Garcia, Executive Producer.

The Amphitheater is part of a series of investments made by the City of New York in the past decade to revitalize the amusement district and improve infrastructure to support the growth of the Coney Island neighborhood.  Since 2009, the City has also helped renovate five of the six designated NYC Landmarks in Coney Island through targeted City and private investments—including the Cyclone Roller Coaster, the Parachute Jump, the Wonder Wheel,  the Coney Island museum, and through this project the Child’s Restaurant Building.   The De Blasio Administration has also dedicated over $180 million toward infrastructure investments—including sewer upgrades and street reconstruction—to facilitate new development and serve the local neighborhood.