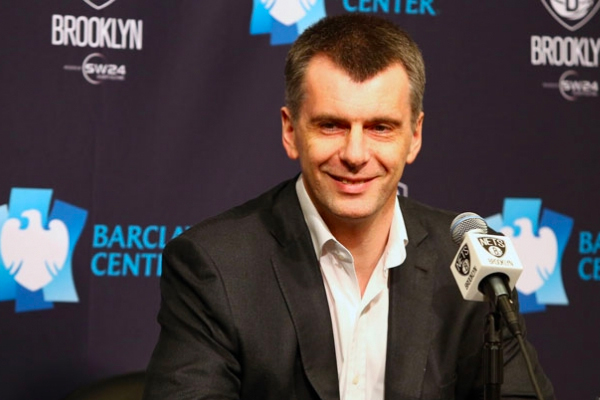 BROOKLYN, NY – Onexim Sports and Entertainment Holding USA, Inc. today has signed an agreement with Nets Sports and Entertainment, LLC, an entity controlled by Forest City Enterprises, to consolidate a 100 percent equity interest in Barclays Center and the Brooklyn Nets. The transaction was approved unanimously by the NBA’s Board of Governors earlier this month.

Mikhail Prokhorov, owner of Onexim, said, “Today’s deal brings the ownership structure of the Brooklyn Nets and their state-of-the-art home in line with NBA guidelines and comes at an opportune time for all involved. We have enjoyed a wonderful partnership with Forest City and Bruce Ratner and worked together to open one of the most successful arenas in the country and to bring professional sports back to Brooklyn. We will continue to support arena management to provide a high level of service to our fans and the best sports and entertainment experience in the world. We also remain fully committed to community programs that were created as part of the arena. We believe a successful arena must be a destination, but also be part of the communities that surround it and more broadly the collection of neighborhoods that represent Brooklyn.”

Bruce Ratner, Executive Chairman of Forest City’s New York subsidiary, Forest City Ratner Companies (FCRC), added, “The development of Barclays Center enabled the return of major league professional sports and world-class entertainment to Brooklyn, and in just over three years of operation, it has become one of the top-grossing arenas in the country. As an anchor for the continued development of Pacific Park Brooklyn, Barclays Center stands as an iconic landmark for the borough.”

Under the agreement, Barclays Center will continue to work with the surrounding communities on quality of life issues. It will also continue to implement the portions of the Community Benefits Agreement and other community programs applicable to Barclays Center that were established as part of the development. Select FCRC staff will also continue to serve as liaisons for community and quality of life meetings, and will work with arena staff and Greenland Forest City Partners, the developer for the larger Pacific Park project, to coordinate construction activities.

“It’s a seamless transition due to the incredible partnership between Onexim and Forest City over the years,” said Brett Yormark, Chief Executive Officer of Brooklyn Sports & Entertainment. “Exciting times are ahead for our fans, partners, and employees as we continue to improve and grow all of our businesses.”

The parties expect to complete the transaction either late this year or early in 2016.