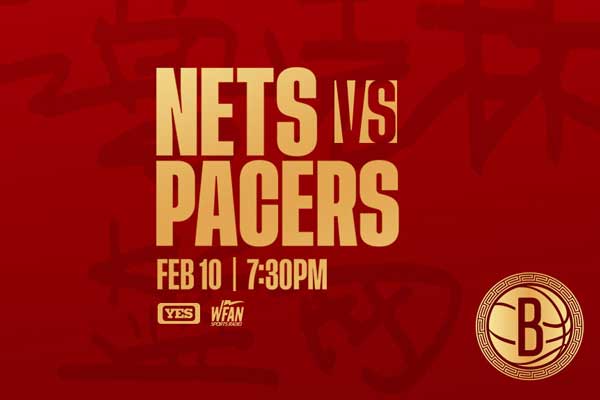 BROOKLYN (Feb. 9, 2021) – The Brooklyn Nets will celebrate Lunar New Year tomorrow, Feb. 10 when the team hosts the Indiana Pacers at Barclays Center. Chinese actor Hou Minghao will serve as the Brooklyn Nets Lunar New Year Ambassador, and the Nets will release a never-before-seen music video to his hit song “You Mean Everything to Me” on their YouTube channel to commemorate the moment.

2021 is the Year of the Ox, which symbolizes hard work, positivity and honesty. The Nets will celebrate the holiday throughout the game, including the debut of videos featuring special dance routines from Team Hype (choreographed by Ziyin Lee), and the Chinese kids hip-hop dance team, TAKALA LAND. The Nets will also share Lunar New Year trivia and Happy New Year wishes featuring various Nets players on their social media channels, and starting lineups will be announced in Mandarin.

Wednesday’s game is part of the NBA’s 10th Lunar New Year league-wide campaign to celebrate the most important annual holiday in China. The NBA and its teams began celebrating Lunar New Year in 2012 and since then, all 30 teams have celebrated the annual spring festival holiday with in-game elements, live performances, traditional food, partner activations, and more. The Nets will collaborate with NBA China to distribute various social and digital content pieces across both the Nets’ and the league’s channels.

As part of the Lunar Near Year celebration, Nets player Chris Chiozza hosted a virtual event with more than 100 children from the New York Rockits, a youth basketball program located in Chinatown, where he spoke with the children about the importance of the holiday and how playing basketball has impacted his life.

Wednesday’s game will be broadcast live on YES Network at 8 p.m. EST and will also be available in China on Tencent, China’s exclusive NBA livestream platform. Tencent’s broadcast will tip off with a special pregame show at 6:30 p.m. EST and will feature a live interview with BSE Global CEO, John Abbamondi.

WFAN is the official radio partner of the Brooklyn Nets.